Fenton was an American glass producer – active from 1905-2011. They are best known for their late 20th century handpainted glasswares, but also produced art glass in a variety of colors and with distinctive and  unique additives.  Fenton cats can be identified by an oval Fenton label, or a very small Fenton logo, usually on the back of the cat.  The logo was not added to pieces until 1973. Handpainted items are signed by the artist, either on the bottom or the back of the piece. 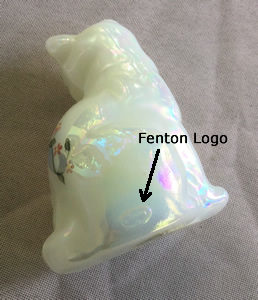 Fenton is best known for its handpainted wares and its Burmese art glass – a two tone satin glass, most commonly shaded from pink to yellow. In addition to the artist, some pieces are signed by a member of the Fenton family. In the later years, Fenton manufactured some items for other companies, notably Lenox and QVC.

The main factory was shut down in 2011, but art glass beads are still being produced under the Fenton name. 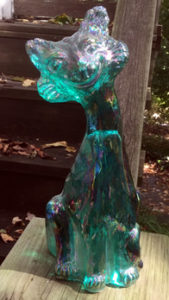 Alley Cat (5177) – The first cat produced by Fenton in 1970. The mold was purchased from the United States Glass Company, who had produced this figurine between 1924-1934 under the name Sassy Susie.

The Alley Cat (shown left) is a large piece – about 11″ high and weighing in at around 3 lbs. This cat is easily distinguished by its somewhat scruffy appearance, with visible ribs, uneven ears, and a face that has a saucy smile and a wink. The body is hollow. It was produced in a number of colors and can be found plain or handpainted. 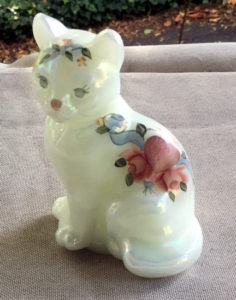 Cat (5165) – Arguably the most popular Fenton cat – this is a fluffy sitting cat or kitten looking to its left. Most of these are hand painted in various designs. It is also known as the “Burmese Cat“, and is solid and substantial figurine, 3.75” tall. Pictured at right painted in the “Hearts and Flowers” design.

This figurine is also the one used for the birthday cats – a white iridized opalescent cat wearing a birthstone-colored rhinestone collar.

Playing Cat (5044) – The smallest Fenton cat, the playing cat or kitten is a 3″ long cat figurine in a crouched and playful pose. 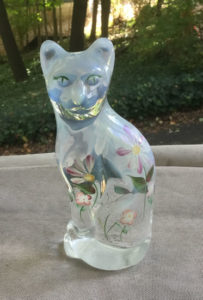 Stylized cat (5065 ) – Another very popular collectible, the Stylized Cat is a Siamese or oriental shorthair type cat. This elegant figurine stands about 5″ tall and is available hand painted or plain, in many  colors and varieties of art glass. Shown right in the “Daisy Lane” pattern in French Opalescent glass.