Founded in 1903 by English glassmaker Thomas G Hawkes and Fredrick Carver (owner of one of the area’s largest cut glass factories at the time), Steuben Glass Works produced fine clear and colored art glass and crystal in its Corning NY factory for over a century. A popular gift, especially for weddings, Steuben glassware was known both for its quality and its elegant packaging. 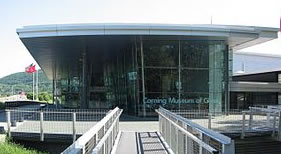 Clear crystal cat figurines made by Steuben include:

Recent sale prices on eBay average $75-$100  for most hand coolers, around $100-$150  for the green eyed cat. Asking prices for other Steuben Glass cat figurines range from the low hundreds to around $1000.

In 2011 Steuben’s Corning factory and New York store both closed. In 2014 the Corning museum of Glass announced that they would be reproducing some Steuben wares, which will be sold through the Museum Store.